Image via Wikipedia THE Proserpine Co-operative Sugar Mill was teetering on the brink of administration late yesterday. Its major lenders are understood to have demanded their money back and talks with Chinese suitor COFCO, about a refinancing ahead of a purchase of the mill, are apparently still in limbo. Proserpine had been given until Thursday […] 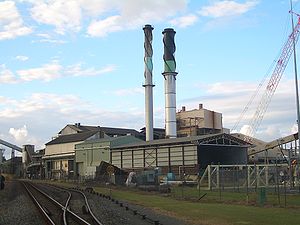 THE Proserpine Co-operative Sugar Mill was teetering on the brink of administration late yesterday.

Its major lenders are understood to have demanded their money back and talks with Chinese suitor COFCO, about a refinancing ahead of a purchase of the mill, are apparently still in limbo.

Proserpine had been given until Thursday night to repay CSR’s former sugar division, Sucrogen – owned by Singapore-based agrigroup Wilmar – $15 million that Sucrogen had lent it to underpin its working capital after Sucrogen agreed to buy the struggling group’s assets for $115 million. At the same time, Westpac – believed to be owed as much as $65 million – had given up on Proserpine’s bids to sell itself and demanded its money back.

The Sucrogen deal, backed by Proserpine’s board, had over the past couple of months been put to a vote of Proserpine’s members. And twice it failed to get the required 75 per cent majority in favour. At the same time, talks between COFCO and Proserpine had failed to forge a deal that the Proserpine board was willing to back, despite COFCO insisting it had matched, and probably bettered, Sucrogen’s offer for the group.

With Sucrogen having demanded its money back, Proserpine had renewed negotiations with COFCO. COFCO Australia deputy chairman Keith De Lacy said late yesterday he was “hopeful COFCO would still be able to put an acceptable proposal (to Proserpine)”. But both COFCO and Sucrogen may find themselves negotiating if they continue their quests to buy Proserpine with an administrator.

The Proserpine board has long warned members that administration was the end-game if a sale of the mill wasn’t quickly concluded. Westpac would then undoubtedly appoint a receiver, and while the mill is an attractive asset, it could well eventually be sold at less than the co-op members could have got through direct deals with Sucrogen or COFCO. If an administrator is appointed, the mill would breach its supply agreement with Queensland Sugar Ltd – the industry’s marketer.

Mill sells to Singapore over Chinese

DIRECTORS of the Proserpine Sugar Mill have decided to stick with their planned $115 million asset sale to Singapore-owned Sucrogen, despite conceding a counter offer from Chinese-controlled Tully Sugar could provide Proserpine sugar growers with a higher payout.

‘Legal uncertainties’ in bid for mill

AN independent expert’s report on competing bids for the assets of the Proserpine Co-operative Sugar Mill reckons mill members would face an uncertain commercial outcome if they went with the Tully Sugar-COFCO bid, due to material legal uncertainties in that offer.
via couriermail.com.au