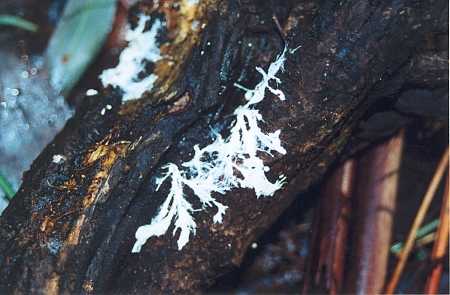 Possibly an example of a slime mould, which are different from but related to the larger fungi. These are different from both fungi and bacteria. They do not form larger fruiting bodies, but masses of slimy or crustose tissue, often coloured. They are distinguished by motility; the hyphae are motile, and form a plasmodium which spreads around under it’s own motion. Photo by Bill Leithhead, Sherbrooke Forest, July, 2003.

5-nitro-2-furfuryl acetate to be used as a biologically active agent against, for example, molds, fungi or bacteria, or as an intermediate in the production of such agents. (Ref. US Patent 4045453).

The above information is provided as food for thought on the many different applications that exist for biobased platform chemicals such as Furfural and its many By-products.

No claims or warranties are made by us with regard to the above product, its effectivenes and/or toxicity.

The page you requested could not be found. Try refining your search, or use the navigation above to locate the post.