Furfural (Furans)
Since 1922, Furfural has been and still is the primary building block of furan chemistry.
Technology
Markets

Furfural (fûr’fərəl) or furfuraldehyde (fûr’fərăl’dəhīd) is an industrial chemical derived from a variety of lignocellulosic biomass such as forest residues or agricultural by-products, i.e. its origin is non-food or non-coal/oil based.

Furfural is the primary building block of furan chemistry, which offers alternatives for the many chemicals, polymers and plastics currently made from oil, coal or gas .

Furfural ..What is it used for?What is Ecoral™HistoryHow is it made?
.. is made e.g. from corncobs, oat hulls and wheat bran and sugar cane bagasse. The name furfural comes from the Latin word furfur, meaning bran. Furfural is a viscous, colorless liquid that has a pleasant aromatic odor; upon exposure to air it turns dark brown or black. It boils at 162°C; it is soluble in ethanol and ether and somewhat soluble in water. It is one of the strongest solvents and has a flash point of 60°C. It’s risk profile is similar to dieseline/kerosene and is not dangerous to handle.

Furfural (“FF”) is an intermediate chemical used in the refining of lubricant oils and rosins. It is also used as herbicides, fungicides, soil fumigants, and as a building block in the production of Lycra® (PolyTHF).

Furfural, as well as its derivative furfuryl alcohol (“FA”), can be used either by itself or together with phenol, acetone, or urea to make resins. Such resins are used in the manufacture of casting moulds, fiberglass, some aircraft components, and automotive brake linings.

Besides the conversion into FA, FF is used as an extractive solvent, motor car fuel, wax recovery, lubricant, adhesive.

By-products are used for flavours:

Since 2003, new applications for the use of furfural have been developed in the bio-fuels, wood treatment, bio-plastics and agricultural sectors. These uses are further descried on the furfural markets pages.

Ecoral™ is the DalinYebo label for furfural that is made in an environmental responsible manner, e.g. by using (award-winning[1]) technology developed and/or implemented by our subsidiary International Furan Technologies (Pty) Ltd (www.ift.co.za). 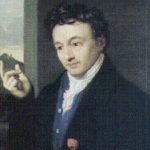 Furfural was first isolated in 1832 by the German chemist Johann Wolfgang Döbereiner[2], who formed a very small quantity of it as a by-product of formic acid synthesis. At the time, formic acid was formed by the distillation of dead ants, and Döbereiner’s ant bodies probably contained some plant matter.

Other milestones:
In 1840, the Scottish chemist John Stenhouse found that the same chemical could be produced by distilling a wide variety of crop materials, including corn, oats, bran, and sawdust, with aqueous sulphuric acid, and he determined that this chemical had an empirical formula of C4H3OCHO.
In 1845, English Chemist G. Fownes proposed the name “furfurol” (furfur – bran; oleum – oil). Later the suffix “ol” was changed to “al” because of the aldehyde function.
In 1901, the German chemist Carl Harries deduced furfural’s structure.
In 1922, the Quaker Oates factory at Cedar Rapids (Iowa, USA) started a small commercial furfural production of ±2.5 tons per day.
From 1934 onwards, the industrial scale furfural production was established.
In 1944 US Government built the Memphis ( Tennessee) plant to support war effort. Today, the Memphis facility no longer produces furfural, but is the home of the world’s largest furfural-based specialty and fine chemicals business (PennAkem, LLC).

Furfural is formed from pentosan[3], a five-carbon cellulose, which occurs prolifically in natural woody products such as oat hulls, corncobs, bagasse, wood chips and other vegetable waste. The reactions are simple. The acidified feedstock is heated, at 100°C the pentosan is hydrolyzed to pentose[4] (xylose) a soluble sugar which is dissolved in the water located within the feedstock particle.
At elevated temperatures the acid catalyst (H2SO4) then promotes the rapid dehydration of the pentose to form furfural.
Although these two reactions are sequential on a molecular level, in all industrial processes they are carried out together in the same reaction vessel.

The stoichiometry of these two steps can be illustrated as follows:

(1) Hydrolysis of pentosan to pentose

(2) Dehydration of pentose to furfural

(3) The overall reaction can therefore be summarized as

Given perfect conditions, 100 kg of pentosan would be converted to 72.73 kg of furfural. The actual yield of an industrial plant is often reported relative to this ideal yield. For example a plant with a yield of 60 % would produce

Under the conditions used in industrial processes the hydrolysis reaction from pentosan to pentose is extremely rapid and in practical terms for bagasse has little effect on the overall reaction rate. The dehydration of pentose to furfural was studied by Root et al[5] using pure pentose in sealed glass ampoules. Under these ideal conditions the rate of disappearance of xylose was found to be

[XY] is the xylose concentration (mole/liter) 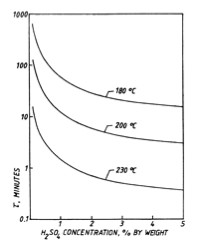 t is the time (minute)

T is the absolute temperature (Kelvin)

As soon as the furfural is formed, it is subject to loss reactions. There are two principal routes to losses. These are the resinification of furfural, where it reacts with itself to form polymers, and condensation reactions where furfural reacts with intermediates in the xylose to furfural reaction. There are two very important considerations with respect to these loss reactions. The first is that while they are accelerated by higher temperatures, the effect on their rates is significantly less than for the xylose to furfural reaction. The net effect of this is that if the reaction can be performed at a higher temperature the yield of furfural is improved. The second consideration is that the loss reactions can only occur in the liquid phase, so a general principle in increasing the furfural yield is to remove the furfural from the liquid phase as early as possible.

Furfural has unique physical and thermodynamic properties. They are presented in the table below and are compared against ethanol, a solvent which is rich in oxygen but does not incorporate the furan ring and benzene with no oxygen but a ring. The differences are self-evident. – Also refer to MSDS. 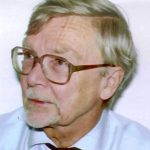 Dr. Karl Zeitsch emphasized that furfural is a unique chemical and used these anomalies as the foundation for his SupraYield® patents.

The furfural density is 1.16 g/ml, exceptionally high for most non-chlorinated solvents, ethanol and most others are around 0.8 g/ml.
The boiling point of 161.7°C is exceptionally high, ethanol is 78.3°C, benzene is 80°C. The furfural/water azeotrope boiling point drops to 96°C, while the ethanol and benzene azeotrope boiling points remain virtually unchanged. The low boiling point azeotrope of furfural is of crucial importance in the operation of SupraYield® reactors and the columns.
The flash point of furfural is 60°C as compared to 12.7°C for ethanol and -11°C for benzene. The fire and explosion risks of furfural are very low when compared to most solvents and simplifies the plant design. Flash Point temperatures above 59°C are accepted by shipping as reasonably safe to handle and are not subjected to a premium.
Furfural is comparatively insoluble in water, 8.3 g/100ml water as opposed to ethanol and similar solvents, which are infinitely soluble in water, whilst benzene is insoluble.
The partial heat of mixing of furfural in water is endothermic, +2938 cal/mole. As benzene is insoluble in water there is no partial heat of mixing. By comparison methanol is -1300 cal/mole, which is exothermic. (An endothermic compound will cool the water in which it is dissolved, exothermic compounds will heat it.) This is a unusual property amongst organic solvents.

[1] The DalinYebo Team of J. Buzzard, B. McKeon and P. Steiner, together with Professor D. Arnold (University if KwaZulu Natal) was awarded the South African Institute of Chemical Engineering (SAIChE) Gold medal in 2004 for the development of the novel SupraYield® technology.

[3] Any of a group of polysaccharides found with cellulose in many woody plants and yielding pentoses on hydrolysis.

[4] Any of a class of monosaccharides having five carbon atoms per molecule and including ribose and several other sugars.

Furfural and its many By-products

Pulp Mills are an ideal source of large amounts of ‘free pentoses’, from which furfural is made.

A Truly Biobased TPA For PET

Biobased terephthalic acid (TPA) for polyethylene terephthalate (PET) Although beverage companies like Coca-Cola Ltd. have adopted biobased-PET since 2009, they use petroleum based TPA and therefore the PET's percentage biomass carbon content is a mere 20%. In a...
Read More

Turing Sweet Sorghum into a biofuel and green chemical.

Monomers from Furfural for Polyesters

Fundamentally the plants have not changed – We made them more efficient.

Map to Furfural and its many By-products

Moving the field of furfural and its by-products into the limelight it deserves.

Turing Biomass into Medicine A method of synthesis has been developed to turn furfual into indolo[3,2-c]quinolines (an antimalarial alkaloid isocryptolepine and its derivatives), reports the Journal of Organic & Biomolecular Chemistry (Issue 36, 2012). The work...
Read More

Poly(Furfuryl Alcohol), PFA, is obtained from a condensation polymerisation of furfuryl alcohol (FA).
FA is made from furfural.

DalinYebo has developed the ‘master key’: We assist with technology and provide insight to the global furfural business.

Engineering that has worked for 90 years.

Connecting the many “dots” of bio-based value chains.

During our 10 years of furfural process R&D, we tested and characterised a large variety of (solid or/and liquid) biomass sources for their handling and processing characteristics.

A methodology in support of conventional investment risk assessments for the bio-based industry.

The µ-BioRefinery™ is a downscaled adaptation of the GreenEnergyPark™ concept.

The core of the GreenEnergyPark is an off-grid power island and biorefinery.

Invest in products derived from sun, water and soil and its people who farm the land.