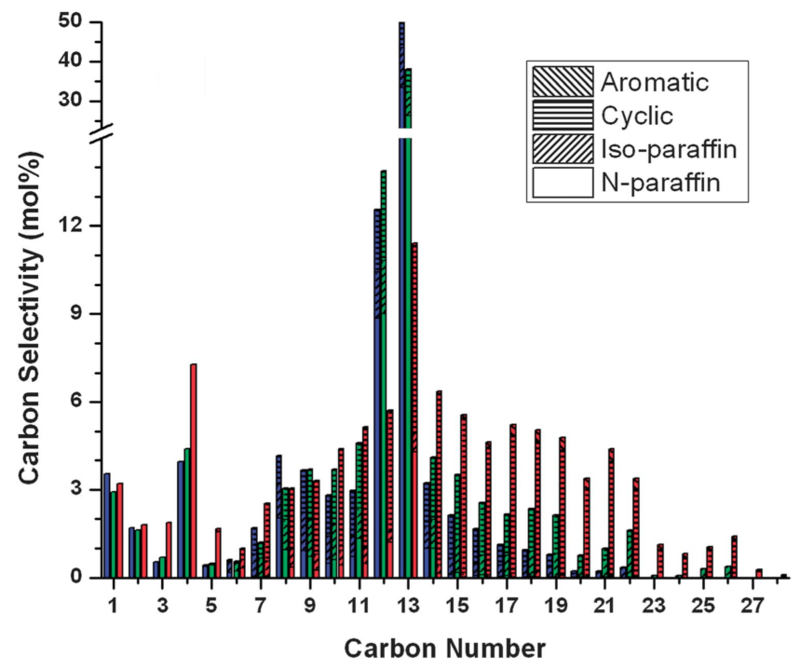 3 January 2013 – A team of researchers led by James Dumesic and George Huber, both now at the University of Wisconsin-Madison, have demonstrated how C5 sugars derived from hemicellulose can be converted into a high-quality petroleum refinery feedstock via a four-step catalytic process. An open-access paper on their work is published in the RSC journal Energy & Environmental Science.

The renewable petroleum feedstock comprises normal, branched and cyclic alkanes up to 31 carbons in length and is similar in composition to the feedstocks produced in a petroleum refinery from crude oil. The new process can be tuned to adjust the size of the liquid alkanes.

These renewable feedstocks can be further processed in existing petroleum refineries to make common refinery products. These feedstocks have no olefinic or heteroatom content, and contain almost no aromaticity. This will help eliminate the expensive hydrotreatment processes downstream in the petroleum refineries, and reduce combustion-related air pollutants, the researchers noted.

Advances are being made worldwide that allow us to more efficiently convert our renewable resources into a range of liquid transportation fuels. Most of these processes produce single-component fuels like ethanol, butanol, dimethylfuran, alkyl esters, and a narrow distribution of straight-chain alkanes. However, gasoline, diesel and jet engines are manufactured to be used with petroleum-derived fuels that are mixtures of compounds having a range of boiling point fractions, combustion properties, and physical properties. Furthermore, most of the previous processes produce renewable fuels that can only be used in gasoline engines.

Earlier, they had developed a four-step catalytic process for converting carbohydrates into liquid alkanes with carbon numbers ranging between 7 and 15. This process involved: (1) dehydration of carbohydrates into furfural and 5- hydroxymethylfurfural (HMF); (2) aldol condensation reaction of furfural and HMF with acetone; (3) low-temperature hydrogenation step; and (4) high-temperature hydrodeoxygenation.

Subsequently, they showed that process could convert an aqueous hemicellulose stream, derived from wood, into a liquid product that is primarily tridecane (n-C13) which could be blended into jet or diesel fuels. These waste hemicellulose sugars are among the most inexpensive biomass feedstocks that are available today, they noted. Preliminary economic analysis suggests that tridecane could be produced at costs of less than $3.00 per gallon in a large integrated biorefinery. However, the drawback to this is that only a single-component fuel is produced.

In the new work, they scaled up the tridecane process and adjusted the chemistry to produce a mixture of different hydrocarbons including n-paraffins, isoparaffins and naphthenes (cyclic alkanes) with carbon numbers from C1 to C31. The overall process comprises four basic steps:

A simple biorefinery model shows that about 55% of a furfural–acetone mixture (10:3 wt ratio) can be converted into cycle oils while also producing other refinery products such as gasoline and natural gas.

They also observed the formation of higher alkane products than C13 from furfural-derived feeds, at relatively lower yields (up to 26%), using the original integrated process described earlier.

Biomass-derived hemicellulose extracts are composed mainly of xylose molecules which are 5-carbon sugar monomers. In order for them to be converted into diesel and jet fuels, these molecules need to undergo carbon–carbon coupling reactions. One way of achieving this coupling is through the aldol condensation of xylose-derived furfural molecules with acetone. The resulting highly functional C13 compound can be used as a tridecane precursor which is a normal alkane in the range of jet and diesel fuels. The further processing of this precursor includes utilization of a low-temperature hydrogenation step for saturation of the double bonds and a high-temperature deoxygenation step which removes the oxygen content in the form of water.

Here we have shown how this process can be modified by the inclusion of other types of carbon–carbon coupling reactions such as oligomerization reactions (e.g. Michael addition and radical polymerization) and cycloaddition reactions (e.g. Diels–Alder reactions). The end product is a mixture of hydrocarbons, composed mainly of normal, branched and cyclic alkanes of up to C31, which can replace today’s petroleum refinery cycle oils.

They also suggested that in the future this technology might be extended to also convert C6 sugars and lignin to renewable petroleum feedstocks as well.