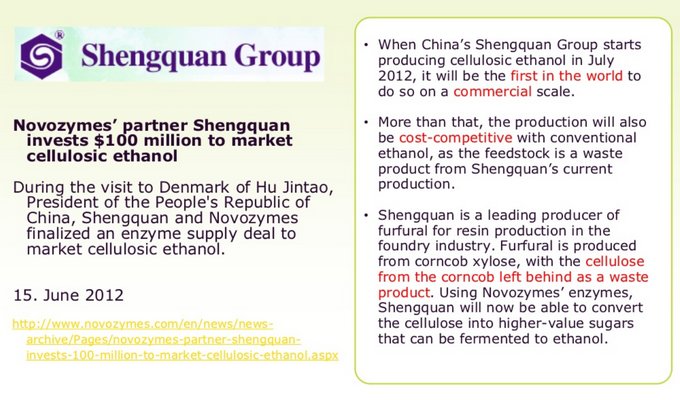 A partnership to commercialize cellulosic ethanol

In In 2008/09 we used lignocellulosic residues from furfural production to successfully make cellulosic ethanol.

It was a continuation of an experiment done during the 1980s, except that this time around we had better and more suitable (used the latest commercially available) enzymes that were supplied by Novozyme (Denmark), Yeasts from NCP (South Africa) and residue from DalinYebo’s pilot plant. The pilot plant’s process conditions modifies the structure of the lignocellulosic material, and in particular cause an amelioration of the recalcitrance of cellulose. In addition, the pilot plant’s conversion of hemicelluloses to furfural and furfural-related polymers could result in a residue which is essentially free hemicelluloses and furfural (2% residual pentosans).

From these experiments, we concluded that furfural production is the most economic process to remove the C5-sugars from a cellulosic ethanol pre-treatment process. Visit dalinyebo.com, for more on this subject.

Shengquan and Novozymes in partnership to commercialize cellulosic ethanol

The Chinese Shengquan Group will start commercial production of cellulosic ethanol for solvents and biochemicals in June 2012 utilizing enabling technology from Novozymes.

“Shengquan is a global first mover in this industry, which is on the verge of materializing right now,” says Poul Ruben Andersen, Vice President for Bioenergy at Novozymes. “Shengquan has profound experience in chemical production and is a leading company in commercializing cellulosic ethanol. Novozymes is proud to join Shengquan in nurturing a green and circular bioeconomy which lessens the dependence on fossil fuel resources.”

Shengquan is a leading producer of furfural using xylose in corncobs, a monomer for resin production in the foundry industry. Using Novozymes enzymes, Shengquan will now convert corncob residues from furfural production into fermentable sugars and then into ethanol for solvents and other purposes.

Shengquan’s cost model shows that its current production cost of cellulosic ethanol is cost-competitive with conventional ethanol as the feedstock is a by-product of their current production.
Novozymes is a leading enzymatic solution provider in bioenergy. It partners with leading producers of cellulosic ethanol all over the world to commercialize this new technology.

Biofuels boost the economy and create jobs
A recent study by Bloomberg New Energy Finance estimates that the advanced biofuel industry has the potential to create millions of jobs, economic growth and energy security worldwide.

Looking at China alone, the study shows that using less than 20% of the available agricultural residues China could produce more than 89 billion liters (23 billion gallons) of biofuel, replacing 37% of its gasoline consumption by 2030.

This would create 2.9 million jobs and reduce CO2 emissions from gasoline-based transportation by 29%. The figures would be even higher if biomass from forestry residues, household waste and energy crops was included.