More than 120 financiers, clean energy experts and representatives of financial institutions from across Africa and overseas participated in the Forum
Furfural | Biobased Electricity | Corncobs | cleantech

CTI PFAN Africa Forum for Clean Energy Financing (AFRICEF) was held on 14-15 September 2010 in Johannesburg, South Africa with the support of the International Center for Environmental Technology Transfer (ICETT), and the local Co-Organisers – the Rural Electrification Agency of Uganda, the Private Sector Foundation of Uganda Energy for Rural Transformation Programme (PSFU ERT), the Energy Fund of Mozambique (FUNAE) and the South African National Energy Research Institute (SANERI). AFRICEF is sponsored by the Renewable Energy & Energy Efficiency Partnership (REEEP), the United States Agency for International Development (USAID), the CTI and ICETT. The AFRICEF sought to match promising clean energy projects from Africa with investment and financing.

More than 120 financiers, clean energy experts and representatives of financial institutions from across Africa and overseas participated in the Forum. Sixteen projects were short-listed to participate in the AFRICEF process after a regional call for proposals for renewable and clean energy projects, launched in February 2010. The projects were selected on the basis of their commercial viability and interest for investors as well as their potential to produce clean energy sustainably and reduce greenhouse gas emissions, while achieving other environmental and developmental benefits. Coming from Uganda (4), Mozambique (4), South Africa (3), Kenya (3), Tanzania and Ghana the projects represent a total required investment volume of USD 155 million and are seeking to raise an aggregate USD 38 million of equity investment for the deployment of a range of clean and renewable technologies in the fields of small hydro, biomass to power, gasification, bio-fuels production, biogas, wind and solar. Together the projects have an estimated combined GHG emission reduction potential of 1,5 million tonnes of CO2 equivalent per annum.

During the course of May, three Project Development & Financing Workshops for the short-listed projects participating in the AFRICEF were held in Kampala, Maputo and Johannesburg. The workshops were designed to provide expert input to the selected project developers on the development and structuring of their projects and the preparation of bankable business plans and investor pitches from professional advisors, clean energy investors and development banks. The workshops marked the beginning of intensive one-on-one coaching that the selected project developers received over the following 2½ months from professional advisors to prepare their projects and business plans to be showcased to targeted investors at the Financing Forum. 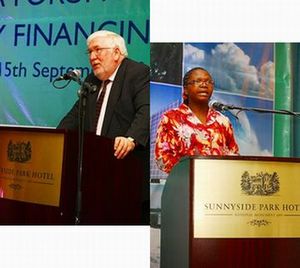 On the 15th September 2010, the Forum opened with welcoming remarks from the Chair of the CTI, Elmer Holt with the US Department of Energy. He stressed the importance of this gathering which was opening up access to private capital markets to implement environmentally sound projects in Africa. Mr. Holt expressed sincere appreciation to the organizers and sponsors for making this historic event possible. Following Mr. Holt there were key note addresses from Mr. John Gormley, Irish Minister of Environment, Ms. Noma Qase, Director of New & Renewable Energy Department of Energy of South Africa, Mr. Brendan McMahon, Irish Ambassador to South Africa, Mr. Godfrey Turyahikayo, Executive Director of the Rural Electrification Agency of Uganda, Mr. Mario Batsana of the Energy Fund of Mozambique and Ms. Amanda Luxande of REEEP. These speakers emphasized the importance of private sector capital in addressing the challenges of climate change and the transition to a low carbon economy and congratulated CTI PFAN on its efforts to promote the flow of investment into clean energy in African countries. The fact that CTI PFAN had worked intensively with in-country institutions and aligned its efforts accordingly with respective government priorities was particularly highlighted as being a positive feature of the AFRICEF process. 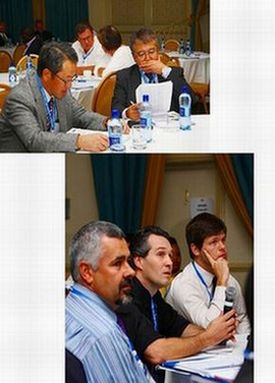 Due to the intensive competition between the 9 projects presented, for first time in the history of CTI PFAN events, 2 projects were identified as winners. The first of the two winning projects was the 8MW Kakaka mini hydropower project in Western Uganda, promoted by a Ugandan-registered company, Greenewus Energy Africa Ltd. The other winner was Barefoot Power Pty Ltd which distributes solar powered LED lights and products to rural poor. Barefoot Power has reached over 100,000 households globally with their clean and efficient lighting and mobile phone charging systems, with the majority of these in Africa. SOIL from Ghana with a Jatropha bio-diesel project dedicated to generating electricity for mobile network base stations in remote areas and a Biomass Gasification to Power project using waste corn cobs by Dalin Yebo Trading and Development (Pty) Ltd in South Africa were the 2 runners up awarded at the forum. These 4 awarded projects represent a total of 120.000 tonnes of CO2 reduction per annum.

Other projects participating in the business plan competition included;

ToughStuff – a distributor of solar products to the rural poor with operations in Kenya and Madagascar and looking to expand rapidly across Africa;
NiQel – a jatropha plantation & jatropha oil production plant in Northern Mozambique exporting biodiesel to Europe;
Coal and Waste Utilisation (Pty) Ltd – a South African project for the production of electricity from the gasification of woodwaste from the timber industry;
The Clean Energy Company – manufacture and sale of pico permanent magnet generator wind turbines in Mozambique;

A summary of all the above projects can be downloaded from HERE.
Project Briefs for all participating projects are available upon request. Please contact kuroda@icett.or.jp or t_kawaguchi@icett.or.jp.

For more Photos, go to Flickr.com

This is the first African Clean Energy Investor Forum. Increasing the market for clean energy is a critical component to reducing greenhouse gas emissions in Africa. The second Forum is planned to be held either at the end of 2011 or the beginning of 2012. In the meantime CTI PFAN is pleased to receive your new business ideas for clean and renewable energy in Africa at the above email addresses. For more information on how to write your business proposal before submission, please refer to the Proposal Template available for downloading form the CTI PFAN website at www.cti-pfan.net.