In addition to providing renewable energy, grass crops like switchgrass and miscanthus could store some of the carbon they pull from the atmosphere in the soil. This is reported in a study by University of Illinois researchers. Bioenergy crops like miscanthus, pictured here, can store more carbon in its soil than corn or soybean crops. […]
Biomass | Bioeconomy | Feedstock | Carbon Capture 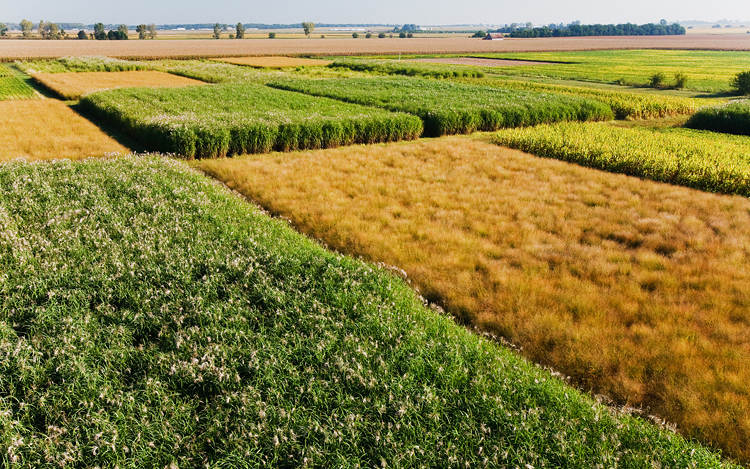 In addition to providing renewable energy, grass crops like switchgrass and miscanthus could store some of the carbon they pull from the atmosphere in the soil.

This is reported in a study by University of Illinois researchers.

Bioenergy crops like miscanthus, pictured here, can store more carbon in its soil than corn or soybean crops.

The study compared soil dynamics – the ratio of carbon to nitrogen and microbial activity – of bioenergy crops with that of a standard corn-corn-soybean rotation. They found that in bioenergy crops, a certain threshold of plant matter left in the field after harvest lets much more carbon accumulate in the soil.

The same is true for Sweet Sorghum, which is THE biomass feedstock we suggest to use for biorefineries in Africa (and elsewhere).

Led by civil and environmental engineering professor Praveen Kumar, the researchers published their findings in the journal Environmental Science and Technology.

“Our study finds that significantly higher soil organic carbon accumulation and reduced soil nitrogen loss can be achieved for switchgrass and miscanthus compared to a corn-corn-soybean rotation,” said Kumar, who also is affiliated with the department of atmospheric sciences at the U. of I.

The ratio of carbon to nitrogen, denoted as C/N, is a critical factor for any crop. One reason for that is the myriad bacteria and other microorganisms that live in the soil are sensitive to changes in this ratio. For example, the ability of microorganisms to decompose organic matter depends on the C/N ratio. They use carbon for energy and nitrogen for protein production, Kumar said.

Plants take in carbon from the atmosphere during photosynthesis. When the crops are harvested, the litter left in the fields – stalks, fallen leaves and any leftover plants – is broken down by microbes, becoming part of the soil.

The study found that when the litter is above a certain threshold value – 25 percent of aboveground biomass in switchgrass and 15 percent in miscanthus – the C/N level is so high that the microbes can’t decompose as much, and the accumulation of carbon in the soil is significantly enhanced.

“At the time of harvest, these crops have a very high carbon-to-nitrogen ratio, which makes their biomass resistant to microbial decomposition,” said Enriqueta Barrera, program director in the National Science Foundation’s (NSF) Division of Earth Sciences, which funded the research. “In the case of switchgrass, a native of North America, results of the study show an accumulation of soil organic carbon over time when more than 25 percent of the biomass is returned to the soil. These perennial grasses are a source of energy, and can be used as a climate mitigation instrument for sequestering carbon in the soil – provided not all the foliage is harvested for energy production.”

Kumar said the reduction in decomposition can also prove to be problematic, though, and nitrogen treatments may be necessary to maintain microorganism populations. In addition, the way these crops use water differs, and has the potential to impact the moisture and runoff rates. All these factors should be considered together, he said, when creating models to study the effects of changing land use from traditional corn and soybeans to bioenergy grasses.

“The loss of microbial biomass in the topsoil, which is the main driver of the threshold effect, is also an undesirable condition because of its important role in regulating plant productivity and biodiversity,” said Dong K. Woo, graduate student and first author of the study. “These issues should be assessed together with the benefits of cultivating switchgrass and miscanthus mentioned above for the extensive land use conversion from the annual row crops to the bioenergy crops.”

The National Center for Supercomputing Applications, the National Science Foundation and the National Great Rivers Research and Education Center supported this work.