Faster hydrogenation of furfural to furfuryl alcohol (in water!).
Furfural | Furfuryl Alcohol | Furfural and its many By-products | Biobased Chemicals | Innovations

Researchers at the University of Oklahoma, in collaboration with the University of Tulsa, have a novel approach for the water-assisted upgrading of the renewable chemical furfural, doubling or tripling the rate of conversion.

Compared to the vapor phase, liquid-phase heterogeneous catalysis provides additional degrees of freedom for reaction engineering, but the multifaceted solvent effects complicate analysis of the reaction mechanism. Here, using furfural as an example, we reveal the important role of water-mediated protonation in a typical hydrogenation reaction over a supported Pd catalyst. Depending on the solvent, we have observed different reaction orders with respect to the partial pressure of H2, as well as distinct selectivity towards hydrogenation of the conjugated C=O and C=C double bonds. Free energy calculations show that H2O participates directly in the kinetically relevant reaction step and provides an additional channel for hydrogenation of the aldehyde group, in which hydrogen bypasses the direct surface reaction via a hydrogen-bonded water network. This solution-mediated reaction pathway shows the potential role of the solvent for tuning the selectivity of metal-catalyzed hydrogenation when charge separation on the metal surface is feasible.

Energy and water are interconnected in the production of renewable fuels. On the one hand, energy is needed to extract, purify and distribute water. On the other hand, water is useful in producing energy. It is known that water plays an important role as an environmentally-friendly solvent, replacing organic solvents. The novelty is that it can accelerate the rate of hydrogenation.

—Daniel Resasco, professor in the School of Chemical, Biological and Materials Engineering, Gallogly College of Engineering and co-corresponding author

In the chemical production of energy in conventional refining, the presence of water in the reactors is undesirable. Normally, when water is present in a reacting system where a catalytic reaction is taking place, it typically absorbs where the reaction should occur, which inhibits the rate of conversion.

Furfural is a biomass-derived compound that is considered a valuable platform for production of fuels and chemicals. An important strategy is to hydrogenate the molecule so it can be used in the chemical industry later. The group has shown that when the molecule contains an oxygenated group, hydrogenation occurs from the liquid phase instead of the catalyst surface.

In the absence of water, all steps in the reaction occur on the catalyst surface. In the presence of water as a solvent, the hydrogen can be shuttled through the water molecule in a higher rate for the reaction. This latter path requires a lower energy barrier to take place and is faster. 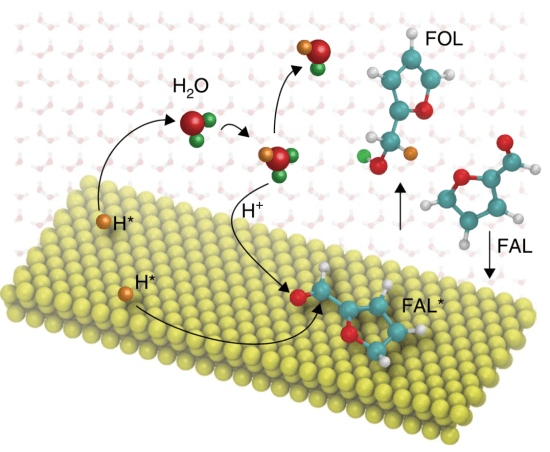 Water directly participates in the key elementary steps. Both surface- and solvent-mediated hydrogenation paths are involved but play different roles for hydrogenation of C and O atoms in the aldehyde group. Zhao et al.

Reaction scheme for the hydrogenation of furfural over a metal surface in water. Water directly participates in the key elementary steps. Both surface- and solvent-mediated hydrogenation paths are involved but play different roles for hydrogenation of C and O atoms in the aldehyde group. Zhao et al.

A paper describing this unique mechanism has been published in Nature Catalysis.

The OU Catalysis Group received a US Department of Energy grant in the amount of $650,000 to further explore the role of water in upgrading renewable fuels in the chemical production of energy.